OIC, the real force behind the ideological rape of the Pussy Riot

Klevius: Dear reader! You're a true idiot or, alternatively, a truly disgusting personality if you call this analysis "islamophobia"!

And you! Please educate yourself about Negative Human Rights and islamic Sharia slave finance during 1400 years!


Politicians and religians in UN, UK. US, Russia etc. sell out your Human Rights through cooperation with islamofascist Saudi based muslim OIC (all muslims Sharia steered world organization)!

OIC has some 1.4 Billion muslims (most of whom have not a clue of what's going on). Some 30-40% (only 500 Millions, but still) of these muslims want Sharia. However, OIC wants to impose Sharia on EVERY MUSLIM! 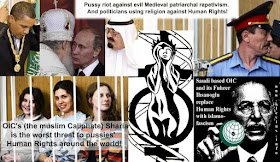 What is OIC's islamofascist Sharia declaration?


The Cairo Declaration on Human Rights in Islam (CDHRI) is a declaration of the member states of the Organisation of the Islamic Conference adopted in Cairo in 1990, which affirms islamic Sharia as its sole source. CDHRI declares its purpose to be "general guidance for Member States [of the OIC] in the Field of human rights".

Predominantly Muslim countries, such as Sudan, Iran, and Saudi Arabia, frequently criticized the Universal Declaration of Human Rights for its perceived failure to take into account the cultural and religious context of non-Western countries.

Though using a universalist language akin to the Universal Declaration of Human Rights, it clearly expresses an islamic particularity. The preamble is mostly religious rhetoric, and the particulars of the CDHRI contain numerous references to the Quran, sharia and aspects of islam that appear on no other similar international list. The CDHRI concludes in article 24 and 25 that all rights and freedoms mentioned are subject to the islamic Sharia, which is the declaration's sole source. The CDHRI declares "true religion", i.e. islam, to be the "guarantee for enhancing such dignity along the path to human integrity". It also places the responsibility for defending those rights upon the entire Ummah, i.e. ON EVERY MUSLIM.

The CDHRI has also been criticized by others than Klevius and Littman, for being implemented by a set of states with widely disparate religious policies and practices who had "a shared interest in disarming international criticism of their domestic human rights record."

Article 24 of the declaration states: "All the rights and freedoms stipulated in this Declaration are subject to the Islamic Sharia." Article 19 also says: "There shall be no crime or punishment except as provided for in the Sharia."

The CDHRI has been criticised for failing to guarantee freedom of religion as a "fundamental and nonderogable right".

In a joint written statement submitted by the International Humanist and Ethical Union (IHEU), a non-governmental organization in special consultative status, the Association for World Education (AWE) and the Association of World Citizens (AWC): a number of concerns were raised, that the CDHRI limits Human Rights, Religious Freedom and Freedom of Expression. It concludes: "The Cairo Declaration of Human Rights in Islam is clearly an attempt to limit the rights enshrined in the UDHR and the International Covenants. It can in no sense be seen as complementary to the Universal Declaration."

The Centre for Inquiry in September 2008 in an article to the United Nations writes that the CDHRI: "undermines equality of persons and freedom of expression and religion by imposing restrictions on nearly every human right based on Islamic Sharia law."

Rhona Smith writes that because the CDHRI's reference to Shariah implies an inherent degree of superiority of men.

Adama Dieng, a member of the International Commission of Jurists, criticised the CDHRI. He argued that the declaration gravely threatens the inter-cultural consensus on which the international human rights instruments are based; that it introduces intolerable discrimination against non-Muslims and women. He further argued that the CDHRI reveals a deliberately restrictive character in regard to certain fundamental rights and freedoms, to the point that certain essential provisions are below the legal standards in effect in a number of Muslim countries; it uses the cover of the "Islamic Shari'a (Law)" to justify the legitimacy of practices, such corporal punishment, which attack the integrity and dignity of the human being.

Pussy Riot, Suffragettes of our time


In March 2012, during an improvised and unauthorized concert in Moscow's Cathedral of Christ the Saviour, the three women from the band were arrested and charged with hooliganism and their trial began in late July. The band members have gained sympathy both within Russia and internationally due to allegations of harsh treatment while in custody and a risk of a possible seven-year jail sentence, but have also been criticized in Russia as well for offending the feelings of religious people.

Pussy Riot's lawyers have said the circumstances of the case have revived the Soviet-era tradition of the show trial. However, a more important connection may be cold political power diplomacy, esåecially via islam, although often camouflaged with0"defense of other religions .

Religious diplomacy can be described as a state activity consisting of the use of a religious factor in foreign policy; that is, the whole set of mechanisms for state cooperation with religious associations in the pursuit of pragmatically defined national interest, use of the international activity of religious institutions, ideas and religious symbols (appropriately interpreted to comply with current political aims) and so on. It is important to emphasise pragmatism of architects of religious diplomacy for it does not depend solely on the—professed— religiosity of political elites.

Nor is religious diplomacy exclusive to theocratic states. Religious institutions (actors) and religious ideas, symbols etc. are treated in this context foremost as assets, which can be used in order to achieve political goals. However, it is not easy to draw a clear-cut line between personal convictions of an individual and his political decisions and it is practically impossible to determine if a particular act was a result of a sheer political calculation or stems—at least partly—from religious motives.

Although decisionmakers usually have at least a sentimental relationship to the given belief, this does not necessarily have to be the case—the religious factor can be used in foreign policy regardless of a decision-maker’s attitude to faith.


For you who have problem with this extremely simple and crystal clear logic, let me explain in plain language:

1) Weird religious/super-natural, astrological, creationist etc individual thoughts have no bearing on this topic. On the contrary, Human Rights give you the right to have whatever thoughts as long as you don't harm others.

2) All religions are collective racism and/or sexism. Some, like islam, are even totalitarian. However, whereas totalitarian islam restrticts the rights of women and other non-muslims, "totalitarian" Human Rights do the exact opposite namely defend those rights. This is why islam (OIC) could never accept Human Rights without destroying itself! And this fact together with the fact that islamic ideology has been behind the worst collective historical crime throughout 1400 years explains why islam (OIC) now is so eager to criminalize any discussion about it!